Hidden hate: What Google searches tell us about antisemitism today

What can the internet tell us about antisemitism in the United Kingdom? It has been shown that people are remarkably honest when they search for information online. Their Google searches and queries reveal interests, prejudices and hatreds that they might keep hidden from friends, family members, neighbours, surveys and even from themselves. They have been shown to share their health secrets, sexual preferences, and hostility towards other groups.

We decided to put this to the test to see what the Google searches made by people in the United Kingdom could tell us about attitudes
towards Jewish people in this country and in general towards Jews. Unsurprisingly perhaps, we found that, every year, people in this
country express antisemitic thoughts through their internet searches. People make some Google searches that are disturbing, including searches such as “I hate Jews,” and “Why are Jews evil?”, along with other searches expressing violent intentions towards Jews. Others post on anonymous hate sites such as the far right Stormfront website, expressing their antisemitic feelings about various Jewish Members of Parliament and celebrities.

By analysing this data, we can get a better sense of the where, when, who and what of antisemitism in Britain today. For example,we looked at whether the voting patterns of towns and cities affect the number of antisemitic searches in those places. We found that searches looking for information on the Holocaust being a hoax rise about 30 per cent every year on Holocaust Memorial Day. We learnt that Jewish women in public life or positions of power are the subject of more antisemitic searches than Jewish men in similar positions. We found evidence of the rise in popularity of antisemitic conspiracy theories, such as the discredited myth relating to the role of the Rothschild family in running the world. And we found that sometimes heightened media focus on Jews or Israel, even if it is positive, can still lead to an increase in online searches for antisemitic content.

We also found strategies that technology companies and civil society organisations can use to fight hatred. For example, our research shows that, when Google changed its autocomplete formula to eliminate antisemitic search suggestions, this lowered the number of people searching for antisemitic material (which also means that, before removing those antisemitic search prompts, Google was directing people to make antisemitic searches
who might otherwise not have done so).

This is the story of the hidden hate that our report reveals. 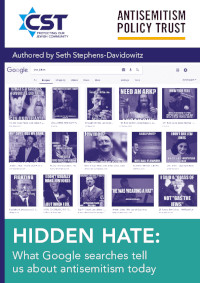