Institute for Jewish Policy Research
Board of Deputies of British Jews

Produced by JPR on behalf of the Board of Deputies of British Jews, and authored by JPR Executive Director, Dr Jonathan Boyd, this statistical bulletin contains data on Jewish school enrolment in the UK for the academic years 2015/16 to 2017/18. It is intended to help community educators and policy makers monitor changing trends over time and to inform thinking about the development of the field.

The report confirms and adds to our existing understanding of enrolment, demonstrating again that more and more Jewish children are going to Jewish schools. The actual number has risen from about 5,000 in the 1950s to close to 35,000 today, a period which, by contrast, has also seen the UK Jewish population as a whole decline by about 30%. The most acute numerical increase has occurred over the past twenty years or so, with the total more or less doubling from about 17,000 in the mid-1990s to the level found today.

Amongst the key findings in the paper:

Download, Numbers of Jewish children in Jewish schools: Statistical bulletin for 2015/16 to 2017/18

Boyd, Jonathan Numbers of Jewish children in Jewish schools: Statistical bulletin for 2015/16 to 2017/18. Institute for Jewish Policy Research, Board of Deputies of British Jews. 2019:  https://archive.jpr.org.uk/object-uk502
Result from 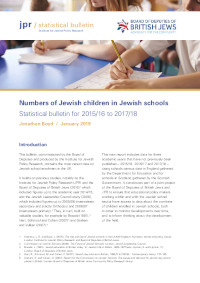