Vital statistics of the UK Jewish population: births and deaths

Institute for Jewish Policy Research
Board of Deputies of British Jews

This study, which forms part of JPR’s research programme for the Board of Deputies of British Jews, investigates the numbers of births and deaths that have taken place in Jewish population of the UK in recent years. Births and deaths reflect natural life events and are critical to understanding how the population is changing over time, particularly in terms of its size and structure. By monitoring the balance of births over deaths or vice versa (i.e. natural increase or decrease), it is possible to predict future trends, including the stability, growth or decline of the population.

The report, authored by JPR research Fellow, Donatella Casale Mashiah, demonstrates that the UK Jewish community has turned an important corner in recent years. Following several decades of demographic decline, during which Jewish deaths consistently exceeded Jewish births, births have exceeded deaths in every year since 2006, which implies Jewish demographic growth in the UK, all other factors being equal (e.g. migration, adhesions, renouncements).

The total number of Jewish births per annum in the UK has increased by about 25% over the past decade, peaking in 2011 at 3,869. This has more to do with birth rates in the strictly Orthodox part of the Jewish community than the remainder, although both sectors have seen an increase.

By contrast, the number of Jewish deaths per annum has been falling over time, broadly in line with national trends, due to increasing life expectancy. 2,411 Jewish death were recorded in the UK in 2016, the lowest number on record. The average between 1979 and 2016 was 3,738.

Denominationally, the majority of deaths (68%) in 2018 were ‘central Orthodox’ – i.e. funerals conducted under the auspices of the United Synagogue, the Federation of Synagogues, or independent modern Orthodox synagogues. These were followed, in turn, by Reform at 18%, Liberal at 6%, Sephardi at 4%, Strictly Orthodox at 2% and Masorti at 1%. These proportions are reflective of the relative size of each group in the Jewish population at the oldest age bands.

Beyond the overarching story of the Jewish population that these data reveal, the numbers themselves are also essential for planning purposes. They are of significant value to local authorities, politicians, community leaders, educators and charitable organisations among others, since they can be applied to assess a variety of communal needs, such as childcare facilities, school places, elderly care facilities, religious services and burial grounds.

Link to article including link to pdf, Vital statistics of the UK Jewish population: births and deaths 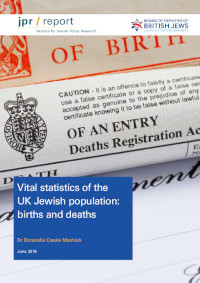