Will my child get a place? An assessment of supply and demand of Jewish secondary school places in London and surrounding areas

This study, which was commissioned by Partnerships for Jewish Schools (PaJeS), takes an in-depth statistical look at the demand for places for Jewish secondary schools in London over the past few years, and makes key projections for the future.

The report is authored by JPR researchers Dr Daniel Staetsky and Dr Jonathan Boyd, and grapples with an issue that has been of growing concern in the London Jewish community for some time. Parents have repeatedly spoken of their frustrations about an insufficient supply of places in Jewish schools in the area, and this is the first study in a decade to investigate this issue in statistical terms. The findings of the study were initially shared with senior representatives of the schools in summer 2016, and subsequently utilised by the schools to consider how best to remedy the situation. The data have also formed the basis of two JPR studies, privately commissioned by two of the schools in the area, to investigate their specific circumstances in greater depth.

The report demonstrates that there were an estimated 80 Jewish children who wanted a place in a Jewish school in the 2016/17 academic year, failed to gain one at that school or any other Jewish state school, and remained on the waiting list. The various projections covered by the report show that the future level of demand is expected to remain at that level over the coming few years, or increase.

Link to article including link to pdf, Will my child get a place? An assessment of supply and demand of Jewish secondary school places in London and surrounding areas

Staetsky, L. Daniel, Boyd, Jonathan Will my child get a place? An assessment of supply and demand of Jewish secondary school places in London and surrounding areas. Institute for Jewish Policy Research. March 15 2017:  https://archive.jpr.org.uk/object-uk433
Result from 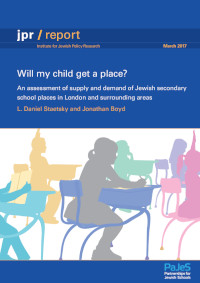