Scottish Jewry in the 2001 Census

The decennial census of Scotland in 2001, like that of England and Wales, was the
twentieth taken. They constituted a landmark because, as an historical first, they
both included questions on religion, albeit voluntary questions. This voluntary status
was in itself unique, since the very essence of a census, compared to other surveys, is
that all questions are compulsory for everyone. The Scottish census was more
sophisticated than that of England and Wales in that it asked not only ‘'What religion,
religious denomination, or body do you belong to'1
but extended this to enquire into
religion of upbringing by asking ‘What religion, religious denomination, or body were
you brought up in?’.

Scottish Jewry in the 2001 Census 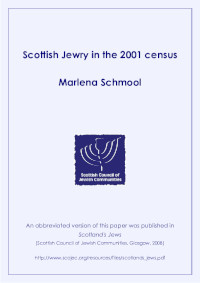