EXPLICIT antisemitism against Jews per se, simply for their being Jewish, remains rare in British public life and within mainstream political media discourse.
In 2014, CST received an unprecedented number of reports of antisemitic incidents. This was due to levels of antisemitism during the relatively lengthy conflict in July and August, between Israel and Hamas in Gaza and southern Israel.
Levels of antisemitic discourse are far harder to consistently observe and measure, than quantitative antisemitic incidents and hate crimes. Nevertheless, many people contacted CST (and other Jewish organisations), expressing their feelings that the conflict was creating a climate of unusually heightened antipathy and hostility to British Jews. Numerous newspaper columnists and other public commentators voiced the same concerns, stating that the public mood against Jews had never before felt as it did.
This was the first conflict involving Israel at a time when social media is all pervading, more so (especially Twitter) than during the last major conflict between Israel and Hamas in 2009. This resulted in a quicker spread of antisemitic discourse, threats and themes than previously seen during any such conflict: visible to witnesses, perpetrators and victims. For example, the hashtag #Hitlerwasright trended on Twitter, was portrayed on placards and was shouted in verbal abuse against Jews.
In Britain, the use of Nazism to attack Israel, Zionists and Jews was the dominant antisemitic theme during the conflict, in both discourse and incidents reported to CST. Calling British Jews child or baby killers was the second most common theme in antisemitic incidents. It is impossible to prove what role - if any - this old antisemitic theme of Jews as child killers played in mainstream media coverage of the conflict, or in widespread political activism during it.

Numerous leading politicians strongly condemned the antisemitism of July and August 2014.
Two opinion polls in May 2014 (before the summer conflict) found that 8% and 7% of British people are unfavourable towards Jews. Findings about Jews having power or control suggest this core feature of antisemitism still resonates with millions of British people.
2014 reinforced the importance of social media to the spread and visibility of antisemitism today. The concerted hatred directed via Twitter at Luciana Berger, a Jewish Labour MP, was an extreme example of how one person can suffer repeated and targeted abuse: facilitated by the instantaneous public free speech nature of social media.
The Parliamentary vote for Palestinian statehood in October 2014 sparked reactions that explicitly or implicitly evoked antisemitic conspiracy charges, against either British or American Jewish and pro-Israel lobbies. This echoed accusations commonly heard during the July-August conflict, that some form of conspiracy or fear was determining Government and mainstream media reactions to the conflict.
There were five cases concerning antisemitism at the highest levels of English football (not including the ongoing use of “Yid” around Tottenham Hotspur FC). These were: the disciplining of player Nicolas Anelka for his “quenelle” salute; linked controversies involving manager Malky Mackay and chairman Dave Whelan; the disciplining of player Mario Balotelli, for unwittingly posting an antisemitic cartoon; and Liverpool FC removing a Jewish New Year message from social media due to the level of antisemitic abuse it attracted.
The British National Party returned to being openly antisemitic, evoking Nazi antisemitic charges within contemporary anti-globalisation and anti-capitalist rhetoric. 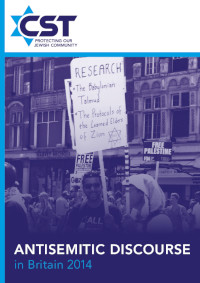