Three previous research projects undertaken by the Research and Evaluation Department of UJIA between 2012 and 2014 have been re-analysed to extract anything relevant to identify the Jewish journey taken by key individuals within the Jewish community.

Gap year research data indicates that almost 40% of respondents who have been on a Gap year or Yeshiva/Seminary in Israel identify themselves as Modern Orthodox and almost 60% had also attended a Jewish school.

49% respondents stated they chose their Gap year organisation because they had previously been on Israel Tour with them and 65% regularly participated in their activities.

From those Gap year graduates amongst the Youth Commission respondents, more than 65% said they were currently involved with a Youth organisation. This is reinforced by nearly 60% of respondents to the Israel Experience survey who had also been on a Gap year stating they had attended a JSoc and a similar percentage were still part of their youth movement. 30% stated they had been fundraising for Israel or had donated to UJIA.

Most of the Gap year respondents felt that going on their Gap year had a positive influence on the likelihood to engage with the Jewish community in the future.

The respondents to the Israel Experience Survey (2012) who had also been on a Gap year, mostly thought their Gap year had been extremely important in shaping their Jewish life, even more so than their family or youth movement.

The Gap year research suggested that almost 70% of respondents, who had previously been on a Gap year, felt that the whole experience had positively affected their likelihood to make Aliyah.

16 individual stories from these previous research studies have been used to highlight some of the Jewish journeys completed by some of our leaders since their time on Gap year.

The UK Jewish Youth Movements Israel Gap Year Programme. An exploration of the Israel Gap Year programme: how can we best ensure the continuation, growth and quality of the Gap Year experience in Israel? (Other) 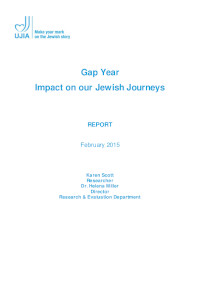