Strictly Orthodox rising: What the demography of British Jews tells us about the future of the community

An important study using UK Census data to assess how the composition of the British Jewish population is likely to change over the coming decades.

UK Census data continues to be by far and away the most comprehensive and valuable dataset that exists on the UK Jewish population as a whole. Whilst the census does not capture the entire Jewish population, census data allow us to examine the socio-demographic characteristics of the Jewish population in greater detail than any other source. In this report, we utilise these data to explore how the numerical balance between the 'mainstream' and the strictly Orthodox (haredi) Jewish population is shifting over time, and what the age profiles and total fertility rates of both groups indicate about the future.

In particular, we highlight how the haredi population is growing at an extraordinarily fast rate, due to its rare combination of high fertility and low mortality. By contrast, the non-haredi Jewish population is declining, not least due to its below replacement level fertility. We note how these measures, combined with an analysis of population momentum over time, help us to develop a probable picture of a future in which the haredi population will become an increasingly large part of the whole.

Whilst this is a demographic certainty, the report also notes that 30% of all haredi adults are aged 15-24. Proportions at this type of level in other populations worldwide have been associated by political scientists and demographers with a range of social problems, not least due to the existence of large numbers of young people who are unemployed or on low incomes. There is no suggestion here that haredi Jews are likely to succumb to the worst of these problems – on the contrary, the community has very high levels of social cohesion and a large number of mechanisms that help to counteract these – but the possibility of increased apathy, disillusionment or abandonment of a strictly Orthodox lifestyle should not be dismissed. Indeed, examined from a demographic perspective, these types of possibilities represent the clearest and most obvious risks facing the haredi community.

In presenting a probable picture of the future of the British Jewish population as a whole, the findings in this report should be utilised for the specific purposes JPR intended: to help Jewish community leaders, operating either within the haredi or the non-haredi sectors, to develop policy to respond to the various challenges that are highlighted.

Download can be found on page, Strictly Orthodox rising: What the demography of British Jews tells us about the future of the community

Staetsky, L. Daniel, Boyd, Jonathan Strictly Orthodox rising: What the demography of British Jews tells us about the future of the community. Institute for Jewish Policy Research. October 2015:  https://archive.jpr.org.uk/object-uk285
Result from 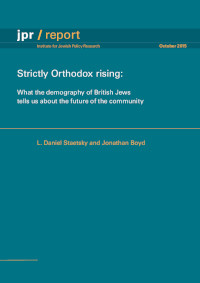