Outcomes of Conversion to Judaism through the Reform Movement 1952-2002

I examined the characteristics of converts to Judaism through the Reform Synagogues, 1952-
2002, exploring the psychological impact of conversion, the nature of their Jewish identity and
the durability of their religious commitment through time. Recognising the large variation in the
Jewish practice and attitudes displayed, I also examined the influence of motivational, family
and biographical factors on their Jewish identity.
Motivation for conversion was multi-dimensional. The instrumental desire to create family
unity was identified as the most powerful motivating factor. The strength of this variable
was found to be a significant predictor of the level of behavioural changes in the converts’
Jewish lifestyle. Counter-intuitively, this motivational factor formed negative correlations
with ethnicity and a non-significant relationship with ritual behaviour.
The data highlight differences between the factorial structure of the Jewish identity of converts
and born Jews. For converts, four identity factors were identified: ritual practice, ethnic
belonging, Jewish development and spirituality. Miller et al. have identified three factors
underlying the Jewish identity of born Jews under 50: behavioural ethnicity, religiosity and
mental ethnicity. Survey data of converts has shown a clear division of ritual and ethnic
behaviours, whilst in born Jews, the same differentiation is not demonstrated.
Like moderately engaged born Jews, converts emphasised the notion of affective identity rather
than the actual performance of Jewish ritual acts, though it is clear that ‘on average’ converts
have a somewhat more intense pattern of ritual practice than born (Reform) Jews.
The majority of the converts felt content with the results of their conversion but the relative lack
of emphasis placed on Jewish continuity as opposed to the convert’s individual self-fulfilment,
can be seen as an indication of a possibility that the conversion process may only delay
demographic decline in the Jewish community for just one or two generations.

Outcomes of Conversion to Judaism through the Reform Movement 1952-2002

Tabick, Jacqueline Outcomes of Conversion to Judaism through the Reform Movement 1952-2002. City University. 2013:  https://archive.jpr.org.uk/object-uk265
Result from 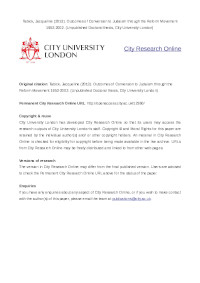