541 antisemitic incidents were recorded by CST
in 2008. This is the third-highest annual total
since CST began recording antisemitic incidents
in 1984.
The total of 541 incidents is a fall of four per
cent from the 2007 total of 5611 incidents. This
is the second consecutive year in which the
annual total has fallen, from a high of 598
incidents in 2006.
The decrease in the number of incidents is due
to the absence during 2007 and 2008 of
significant ‘trigger events’ that can cause
temporary increases in antisemitic incidents.
The one trigger event that did occur during
2008, the fighting between Israel and Hamas in
Gaza, came too close to the end of the year to
affect the overall trend for 2008, but it is likely
to cause a rise in the incidents total for 2009. 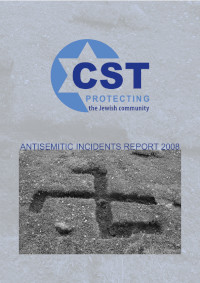