Individuals practising community: the central place of interaction in the educational philosophy of Limmud

In light of growing evidence of exogamy among Jews and diminishing levels of community engagement, the question of how to sustain and cultivate Jewish identity has become a major preoccupation in the Jewish world since the early 1990s. Among the numerous organisations, programmes and initiatives that have been established and studied in response, Limmud, a week-long annual festival of Jewish life and learning in the UK that attracts an estimated 2,500 people per annum and has been replicated throughout the world, remains decidedly under-researched. This study is designed to understand its educational philosophy. Based upon qualitative interviews with twenty Limmud leaders, and focus group sessions with Limmud participants, it seeks to explore the purposes of the event, its content, its social and educational processes, and contextual environment. It further explores the importance of relationships in Limmud's philosophy, and the place of social capital in its practice.

The study demonstrates that Limmud's educational philosophy is heavily grounded in the interaction of competing tensions, or polarities, on multiple levels. Major categorical distinctions drawn in educational philosophy and practice, and Jewish and general sociology, are both maintained and allowed to interact. This interaction takes place in a "hospitable and charged" environment – one that is simultaneously safe, respectful and comfortable, whilst also edgy, powerful and challenging - that allows the individual freedom to explore and navigate the contours of Jewish community, and the Jewish community opportunity to envelope and nurture the experience of the individual. The study suggests that the interaction of these competing forces, in the context of an intensive Jewish experience, may be an important feature of Jewish educational initiatives attempting to respond to the identity challenges described above. More generally, in detailing a contemporary educational model that sustains religious/ethnic identity whilst emphasising critical thought and openness to competing claims and ideas, it presents an approach that may be applicable in other religious and ethnic communities.

Individuals practising community: the central place of interaction in the educational philosophy of Limmud

Boyd, Jonathan Individuals practising community: the central place of interaction in the educational philosophy of Limmud. University of Nottingham. 2013:  https://archive.jpr.org.uk/object-uk221
Result from 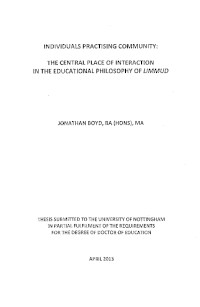