Mouths Filled With Song: British Reform Judaism Through the Lens of its Music

The Movement for Reform Judaism [MRJ] - has been undergoing substantial changes in its style and patterns of worship. The introduction of a new prayer book has been accompanied by a pronounced focus on the music of the various synagogues, as a key element in the re-envisioning of prayer and spirituality in 21st century congregations. These have taken place within the context of the wider context of synagogue renewal, which surfaced first in the USA as Synagogue 2000 (now Synagogue 3000), entailing study, reflection and implementation of a variety of different changes in the hope of attracting and retaining Jews in synagogue services.

This thesis focuses on the relationship between forms of liturgical and ritual music and patterns of spirituality and identity within the UK Reform Jewish world during a period of significant social change. ‘Getting the music right’ is, for some, a major aspect in synagogal renewal and commands a central place in the focus on Judaism into the twenty-first century. Focusing on attitudes towards and experiments with music afford a distinctive manner to access the complexities involved in the interplay of diverse community traditions and contemporary pressures for change.

The complexities of this examination are mirrored in the interdisciplinary perspective of this thesis, as it encompasses the theoretical resources of theological, historical, and social scientific disciplines. Through the historical expansion of the movement, and the synagogues in which I have engaged in ethnographic research, we will note the shifts in movement and synagogal musical cultures, each affording a unique perspective on music in worship. Each helps to elucidate a little bit what constitutes the perspectives and preoccupations of the Anglo-Reform Jewish world.

Jews United and Divided by Music: Contemporary Jewish Music in the UK and America (Other)

Borts, Barbara Mouths Filled With Song: British Reform Judaism Through the Lens of its Music. Durham University. 2014:  https://archive.jpr.org.uk/object-uk219
Result from 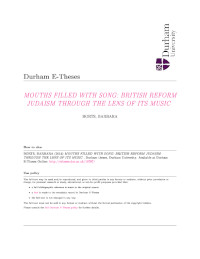