Ultra-Orthodox or Haredi society in Israel is defined as a 'society of learners.' The pursuit of a full program of Torah studies at a Yeshiva followed by enrollment to a kollel, once the legacy of just a few hundred Haredi men, has become a widespread phenomenon. This has been made possible by the practice of draft deferment for yeshiva students, and the development of systems of financial support designed to sustain the families of kollel students (yeshiva students are single, kollel students are married). The result has been a steady growth in the rate of non-participation in the workforce for Haredi men.

By contrast, outside of Israel, in Western countries where there is no compulsory conscription, young Haredi men have the option of choosing the way they combine Torah study with earning a livelihood at any time in their life. Multiculturalism, which developed in Western cities mainly in the second half of the twentieth century, enabled various combinations of tradition and modernity among immigrant groups, including the Haredi one. In Israel, on the other hand, Haredi society entrenched itself in the stronghold of yeshivas and kollels and in so doing succeeded, almost completely, in disconnecting new generations of Haredi men from professional and academic studies―the foundation of higher scale income.

In order to predict trends in Israeli ultra-Orthodox society in the coming years, it is important to understand the conditions under which this society operates in other countries. In this study London's Stamford Hill cluster of largely Hassidic population, serves as a kind of 'laboratory' for examining patterns of how kollel students enter the work cycle in the absence of compulsory conscription. It might, therefore, serve as a means of comparison with the Haredi society in Israel. The study was based mainly on interviews and random conversations with leaders, activists, professionals, business people, and the 'man in the street'.

The main finding of this paper is the existence of a range of options for correlation between Torah learning and earning a livelihood. I have identified five functional types of young Haredi men, who characterize not only various kinds of Haredi men, but also various stages in a person's life related to the balance that can be maintained between learning and earning:
• The 'full-time learner' devotes all of his time to Torah study, relying on his parents and in-laws for sustenance, as well as on the welfare state allowances and the kollel stipends.
• The 'learner who earns a small amount' learns full-time in a kollel, but concurrently, tries to make a partial living. In this way he can somewhat rise above the financial hardship and assume his share in the duty to earn a living, which is also one of the norms of ultra-Orthodox society. This type of student pursues earning opportunities that fit in with his Torah study schedule: the breaks between lessons during the day (bein hasdarim), and the longer vacations during the year (bein hazmanim).
• The 'part-time learner’ commits himself to Torah studies only for part of the day. The remaining time is dedicated to paid activities, either as a teacher or in the realm of trade or services.
• The 'learning earner' has left the kollel and found his way into gainful employment while maintaining a regular regimen of Torah study based on the practice of 'setting a fixed time for Torah' (kove’a itim laTorah). Some learning earners (known as balebatim) learn with a hevruta (a study partner) at home or in a beit midrash (a designated 'House of Study'), before or after prayer times in the morning or evening. Some find time to learn for an hour or more during the day, near their workplace. The connection with Torah study is fastidiously maintained.
• The 'earner who learns a small amount' does not set times for studying Torah on a daily basis, but rather learns intermittently, on the Sabbath and holidays, or in family events.

It appears that Haredi society outside of Israel is able to maintain the dynamic balance between full-time study and earning an income because the quota in years for full-time kollel study is determined on an individual basis. Married Haredi men outside of Israel set for themselves a personal quota for years of full-time Torah study, beyond their bachelor years in yeshiva. After they have reached the decision that they have fulfilled the quota, they attempt the work cycle in different ways. The quota is not fixed and uniform. There are no official rules, nor is there anything but tacit rabbinic agreement on the matter. It appears that every married man is free to determine the level of quota for himself, social pressures and practices notwithstanding. A decision to terminate one's studies is based on existing conditions, which vary, both in terms of the willingness and ability of married men to continue in their studies, and in terms of their family's economic situation.

Among the Hasidic Haredi men, the period of full-time learning is usually shorter than among non-Hasidic groups ("Lithuanian" and "German" Haredi men). The Hasidic men are content with one to three years of Torah studies as married men in the kollel. In contrast, the non-Hasidic Haredi men assume quotas of three to five years, and sometimes more. This disparity in years is rooted in the different world views of these two groups regarding the religious and social importance of full-time Torah studies. As a result, Hasidic men are the first to enter the world of work. One might assume that if legislative changes regarding mandatory military service in Israel are to transpire, Hasidic men, more so than the Lithuanians, will rapidly abandon the status of married students and begin working. The Sephardic Haredi men are more enigmatic in this matter. On the one hand, in Sephardic Judaism there is a tradition of combining work with Torah study, as well as combining sacred with secular studies. On the other hand, they have been significantly influenced over the decades by the tradition of Lithuanian yeshivas.

Based on this study conducted in London, which sequels a previous study I conducted in the New York City area, it can be concluded that in recent years setbacks have curtailed the momentum of growth in the percentage of full-time learners in Haredi society. Of late, economic difficulties have jeopardized the continued generosity of the welfare state. In addition, consumer society has taken a stronger hold in the ultra-Orthodox public. Haredi society outside of Israel is adjusting itself to internal and external changes, and is also attentive to the stirring desires of its members. The overall impression from the available data on the Haredi community in London's Stamford Hill area and a number of other ultra-Orthodox communities outside of Israel, is one of a society seeking and finding realistic balances between Torah study and earning a living, in keeping with the changing financial and social circumstances. In its heyday of financial flourishing, this society expanded the component of full-time Torah-learners. In times of hardship it reduces this component, and it appears that it is doing so at present.

This study proposes that ultra-Orthodoxy in Western countries is not a 'society of learners,' as is the accepted definition of ultra-Orthodoxy in Israel. It is rather a 'society of learners and earners,' even in the most conservative parts of the Haredi population, such as the Stamford Hill community, where only a small proportion – approximately one-fifth – of married Haredi men devote themselves to full-time Torah studies in a kollel framework. Some two-thirds of these men are engaged, in different ways, in earning a living. Even among the kollel students themselves, there is a certain degree of involvement in earning a living, whether part-time or occasional. This is not the current situation in Haredi society in Israel, where about two thirds of the men do not work for a living. However, a close look at budding processes in recent years within Haredi society in Israel makes it possible to state that many Haredi men are ready to take the alternative path, in various levels of balance, of learning and earning. Based on these signs, it can be hypothesized that ultra-Orthodox society in Israel is beginning to move towards a new situation of a 'society of learners and earners,' in a manner similar to Haredi society in North America and Western Europe.

Gonen, Amiram Between Torah Learning and Wage Earning The London Experience and Lessons for Israel. The Floersheimer Institute for Policy Studies. 2006:  https://archive.jpr.org.uk/object-uk216
Result from 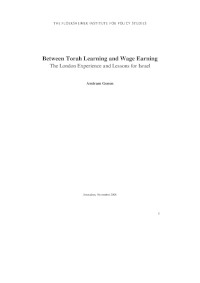