From Old and New Directions: Perceptions and experiences of antisemitism among Jews in Italy

The study demonstrates significant concern among Jews in Italy about antisemitism in their country, with clear indications that many perceive it to be a growing problem, particularly online. At the same time, most Italian Jews feel well integrated into Italian society, antisemitic violence is rare, and only a minority feels sufficiently unsafe to be considering their future in the country.

The report,also highlights the particular nature of antisemitism in the country. It indicates that today it is more commonly grounded in political ideologies – from both the left and right – than in religious extremism, suggesting that it is driven both by old style right-wing nationalism, and newer forms of left-wing antipathy informed by a spill-over of incidents in Israel and the Middle East.

The data in the report were gathered and analysed by researchers at JPR, as part of a major study commissioned by the European Union Agency for Fundamental Rights (FRA) in 2012. The general findings from that study were published in a landmark report in late 2013, but have been analysed afresh in this follow-up study, the second in a series of JPR reports about antisemitism in different European Member States. 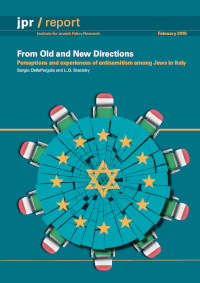