Jews and the News: News consumption habits and opinions of Jews in Britain

The Israel Survey was carried out by JPR in early 2010 and was the first national study dedicated to an examination of the attitudes of Jews in Britain towards Israel. Supported by Pears Foundation, the survey generated a total of 4,081 responses, the largest sample so far assembled of Jewish public opinion in Britain.

The key findings report showed that for a majority of respondents, Israel forms a very important aspect of their Jewish identities, with almost three-quarters describing themselves as ‘Zionist’. Nine out of ten felt that Israel is the ‘ancestral homeland’ of the Jewish people and an even greater proportion had visited the country. The survey also explored territorial issues, the peace process, defence policy and Israeli society.

The political leanings of Britain's Jews (Series)
Committed, Concerned and Conciliatory: The attitudes of Jews in Britain towards Israel (Series) 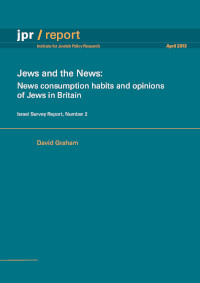