Hate crimes against London's Jews: An analysis of incidents recorded by the Metropolitan Police Service 2001-2004

For the first time in published form, Metropotitan police service records of antisemltic incidents in London are analysed and placed in the context of the attention drawn to the increasing problem of street-tevel antisemitism reported by the European Union Monitoring Centre on Racism and Xenophobia (2004) and the U.S. State Department (2005).

Drawing from crime reports for the calendar years 2OO1-2OO4, the book discusses the nature and location of incidenG, and the charaderistics of victims and offenders, and uses qualitative information in the crime reports to theorise about the social context and potential motivations behind incidents. The implications that the data have on the effective investigation of such incidents by the police are atso drawn out.

The authors criticatly examine the assumption that there is an inreasing problem of antisemitism in London and, through their detailed anatysis of officiat records, establish that most antisemitic incidents recorded by the police do not appear to be carrled out by perpetrators assoclated with organised or extremist groups but instead occur as part of the dynamics of everyday life. The authors have developed an innovative typology of these incidents that will provide a valuable addition to current debates being held internationaly on antisemitism and hate crime. 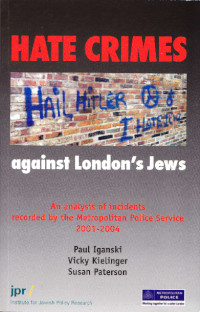