Muslims and Jews in Switzerland

The Muslim population in Switzerland has increased rapidly from 16,353 in 1970 to an estimated 400,000 persons today, while the general population grew from around six million to 7.6 million. The Jewish community today is some 18,000 strong, a number that has not changed since the 1950s. Whereas the Jewish community, given its small size and its age profile, is likely to shrink and lose influence, the Muslim community can be expected to become more influential. Already up to eight percent of the population in the large cities is Muslim. Muslims in Switzerland are younger and less well educated than the average, whereas the Jewish community is older than average and the best-educated group in the country.
The Muslim community in Switzerland is marked by extreme religious and ethnic diversity and hence, also, by a variety of attitudes toward Jews and Israel. There has so far been no openly anti-Jewish mass movement among Muslims with multiple hate crimes committed such as in France. Kurds, Turks, and Bosnians tend to be more secular and friendlier toward Jews than Arabs from North Africa and the Middle East.
There has been some cooperation between the Jewish and Muslim communities with the former even providing support to the latter. Certain Muslim groups want to learn from the established Jewish community how to gain legal, political, and social acceptance in Switzerland.
Muslims have not been the driving force behind the Swiss version of the new Europe-wide anti-Semitism. However, there is a growing radicalization of disaffected Muslim youth, with Islamism gaining ground among certain groups.

Muslims and Jews in Switzerland 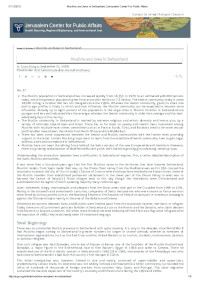