The Holocaust (Shoah) Immovable Property Restitution Study is the first-ever comprehensive
compilation of all significant legislation passed since 1945 by the 47 states that participated in
the 2009 Prague Holocaust Era Assets Conference and endorsed the 2009 Terezin Declaration
that came out of the Prague conference.

The Terezin Declaration (and its companion document, the 2010 Guidelines and Best Practices,
endorsed by 43 countries) focuses in substantial part on the treatment of immovable (real)
property restitution: private, communal, and heirless property. The Study examined private,
communal, and heirless property as discrete components of each country’s restitution efforts
from 1944 to 2016.

Russia endorsed the Terezin Declaration in 2009, but declined to endorse the 2010
Guidelines and Best Practices. In 2012, the Russian Foreign Ministry stated that “the
[Terezin] declaration does not contain principles that are essential to our country. We
consider it important to deal with these issues on the basis of post-war settlement
principles fixed in the Yalta and Potsdam conferences of the Allied powers. We would
like to emphasize that it’s necessary to regard the Holocaust era as fixed in the
declaration, which means from 1933-1945.”

As part of the European Shoah Legacy Institute’s Immovable Property Restitution Study,
a Questionnaire covering past and present restitution regimes for private, communal and
heirless property was sent to all 47 Terezin Declaration governments in 2015. As of 13
December 2016, no response from Russia has been received 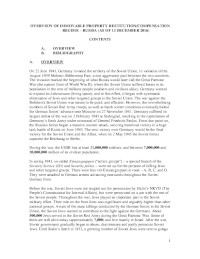