Anti-Semitism and Islamophobia in the Netherlands: concepts, developments, and backdrops

This is an Open Access article distributed under the terms of the Creative Commons Attribution-NonCommercial-NoDerivatives License
(http://creativecommons.org/licenses/by-nc-nd/4.0/), which permits non-commercial re-use, distribution, and reproduction in any medium,
provided the original work is properly cited, and is not altered, transformed, or built upon in any way.

Link to article including link to pdf, Anti-Semitism and Islamophobia in the Netherlands: concepts, developments, and backdrops 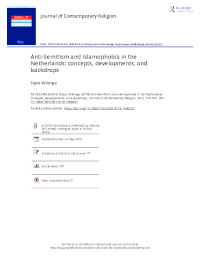