Whereas there is already quite a significant bibliography focusing on the experiences of intermarried couples in Europe, less attention has been paid to their children. This study, along with parallel studies in Germany and France, suggest that the road to "assimilation" is not as linear and inevitable as it was thought to be; that the children of mixed couples never quite disconnect from Judaism, much on the contrary, Judaism is widely recognized to be an element of their identity. A second important finding is the capital role that the families and the Jewish institutions play in the formation of a positive Jewish identity among the children of intermarriage. Those who grow up in a Jewish household or who have been affiliated with Jewish institutions tend to develop stronger Jewish identities. Last but not least, far from being a "passive" population, most of the interviewees that want to be connected to Judaism show a very active attitude towards the search for a suitable Jewish environment, one that can assure them both legitimacy and acceptance.

Intermarriage within the Dutch Jewish community is on the rise. The numbers speak for themselves: out of the 52,000 Jews residing in the Netherlands 25% just have a Jewish mother and 30% a Jewish father. 50 in-depth interviews were conducted with individuals between the ages of 20 and 40 who have one Jewish parent and have different levels of community involvement. All respondents identify with Judaism in some way. How people connect to Judaism varies from person to person. Most people feel Jewish although their level of Judaism depends on their personal situation. There is a small group that feels Jewish in every situation and another group that only has a minimal connection to Judaism (mostly holding on to memories of the Shoah passed on by their parents and grandparents). Many individuals feel (strongly) connected to Judaism but do not practice Judaism in their daily lives. 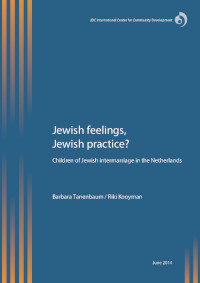