Walking the Jewish Past? The Effects of Tourism on the Interpretations of Budapest Jewish District

In this thesis I am analysing how transnational tourism observes, narrates and sells the
historical Jewish District of Budapest, Hungary. This urban space is a landscape of a specific
memory, which has been constructed and shaped by different actors throughout the past half
century. I argue that with the post socialist transformations this urban space became structured
by and around Jewish identity and the experience of the Holocaust. I explore it through the
study of walking tours, which constitute certain practices of place making. I show that the
commoditisation of urban space physically reduces the territory of the District to a number of
streets, which simultaneously turns into a sacred Jewish space for selective memories.
Furthermore, at the same time it becomes an international enterprise with a positive meaning
where new foreign heroes have emerged, nostalgia has been created for an idealised past and
a selective amnesia is imposed for memories related to the Soviet past.

Walking the Jewish Past? The Effects of Tourism on the Interpretations of Budapest Jewish District

Tóth, Erzsébet Fanni Walking the Jewish Past? The Effects of Tourism on the Interpretations of Budapest Jewish District. Central European University, Department of Sociology and Anthropology. 2008:  https://archive.jpr.org.uk/object-hun62
Result from 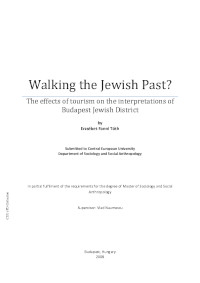