The Future of the Jews in France

There are approximately 550,000 Jews in France. About 60 percent live in the Paris region, mainly in suburban areas. In Paris itself, the number of Jews is shrinking with the exception of the capital’s west. Marseilles is the second largest Jewish agglomeration in France. There, too, most Jews live in the suburbs. As in the Paris environs, many Jews are poor, either unemployed or low-income. The next largest Jewish communities are Lyon and Strasbourg.
Among the Jewish institutions in France, three occupy central positions. The Consistoire Central de France (Consistoire) deals with religious issues; the Fonds Social Juif Unifié (FSJU) addresses social concerns; and the Conseil Représentatif des Institutions Juives de France (CRIF) is the roof organization of France’s major Jewish institutions.
The major Jewish organizations in France are in crisis. The organizational model that has served the French community in the past decades is no longer viable. It is unclear whether a new workable model will emerge that can replace it.

The Future of the Jews in France

Trigano, Shmuel The Future of the Jews in France. Jerusalem Center for Public Affairs. August 15 2006:  https://archive.jpr.org.uk/object-fra59
Result from 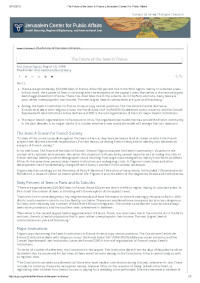