Is Europe Good for the Jews? Jews and the Pluralist Tradition in Historical Perspective

Over the past few years there has been a growing trend within Jewish communities to raise the alarm about Europe and the rise of the ‘new antisemitism’. A range of phenomena, from an increase in attacks on Jewish individuals and institutional buildings to a perceived anti-Israel and pro-Palestinian bias has led to the notion that Europe is no longer so good for the Jews.

In his paper, Steven Beller argues that the impulse to sound the alarm is misplaced, especially when aimed at ‘Europe’ itself. Modern-day Europe and the emerging institutions of the European Union are very good for the Jews. Indeed the EU was born and continues to develop in the great European tradition of pluralism that Jews have done so much to foster. Dr Beller believes the way forward lies in the recognition of the need for mutual respect and co-existence among Europe’s many cultures and communities, including Christians, Jews and Muslims.

Beller, Steven Is Europe Good for the Jews? Jews and the Pluralist Tradition in Historical Perspective. Institute for Jewish Policy Research. 22 April 2008:  https://archive.jpr.org.uk/object-eur48
Result from 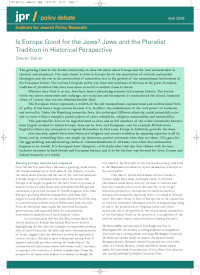