Jewish Community Zagreb, Research and Documentation Center of the Holocaust victims and survivors in Croatia

The initiative for Survey is given by Research and Documentation centre for
Holocaust victims and survivors in Zagreb, with support by Jewish community
Zagreb, Claims conference research funds and JOINT.
This is the second social Survey on the same population of Jewish community in
Zagreb. First survey which was realized before ten years – in 1995, had a great
success by providing with relevant data social and humanitarian work in Community,
what was important at that time, after the war in ex-Yugoslavia.
With the present research in 2005, we wish to obtain a key informant survey to
facilitate community social work, with respects to the needs of the Jewish elderly and
the implication of the aging in the Jewish community.
Objectives of the survey is to describe actual and recent situation and needs for the
elderly members of community older than 65 years, and to renew and support social
work, voluntaries actions and solidarity in the Jewish communities.
In the last ten years, between two surveys, we can perceive several mayor changes
in demographic, social, economical and health situation of the elderly, mainly
holocaust survivors:
 Increased proportion of elderly persons in the Jewish population in Croatia
 Increased proportion of persons, aged 75 years and more in the population of
elderly
 The rise in the number of persons aged 75 and more, increase the number of
disabled elderly
 Restrictions of public basic medical care and decline of public social welfare
expenditure
 Worsening of the economical situation and lowering standard of living
 Changes in the role of the Jewish family in caring for the elderly
 Lack of the data in community on the needs of the elderly 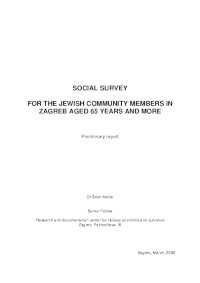