According to data collected by the monitoring program, one case of presumably antisemitic violent crime was recorded in 2016.

As can be seen, the number of violent antisemitic crimes peaked in 2005, and a notable decline has set in since 2007. In recent years, the number of such incidents remains at a stable low. Besides quantity, 2005-2007 was also the time when the most dangerous, life-threatening street attacks took place.

The label “vandalism” is applied in this report for two categories: physical damage, such as broken windows and arson attempts, done to buildings that are part of the Jewish infrastructure (synagogues and community centers), tombstones in Jewish cemeteries and Holocaust memorials, and antisemitic and/or neo-Nazi graffiti on similar objects, which are evidence of ideological motivation.

Thus, in 2015-2016 there has been a slight reduction in the number of acts of antisemitic vandalism in comparison to the 'peak' year of 2014. 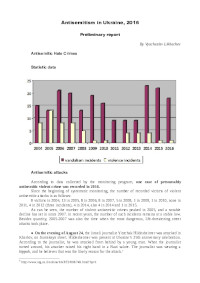