This report has been written at the request of Jewish Women’s Aid (JWA). JWA commissioned this
research to better understand several key factors influencing their work: general Jewish opinion
and knowledge about domestic violence; the ways in which current and former clients come to
JWA and how useful they find its services; and the position of JWA in the UK and in comparison to
other Jewish domestic violence charities in Israel, the USA and Canada.

The researchers determined that the best way of ascertaining information about these areas of
interest was to conduct a three- stage research project. Firstly, a literature review was undertaken
to contextualise the work JWA does in both a national and international context. This literature
review informs chapter two of this research report, which provides an overview of domestic
violence in the UK with references throughout to three countries of interest to Jewish Women’s Aid
(because of the presence of Jewish-specific domestic violence charities), namely Canada, the
United States, and Israel.

Secondly, the researchers conducted a domestic violence Jewish general opinion survey, which
yielded 842 complete responses. The survey was largely taken by women and this response rate
makes this survey, to the knowledge of the authors and JWA, the largest Jewish survey on a
women’s issue ever conducted.

This report discusses the findings from the survey; see chapter three for details, including a discussion of the methodology employed.

Finally, and perhaps most importantly, the researchers conducted face –to- face interviews with
twenty current or former JWA clients, who agreed to speak to them after communication from JWA
employees. Chapter four of this report gives voice to the personal suffering experienced by
women; it illuminates the ‘real life stories’ behind the statistics.

The report concludes with recommendations that JWA will be implementing to continue combating
domestic violence in all of its forms; these recommendations are based both on the findings arising
from the general survey and client interviews, and from examples of best practice from domestic
violence charities in the UK and abroad. 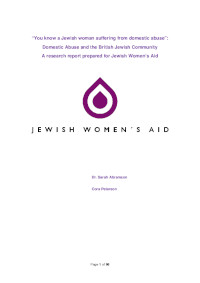