Searching for community: A portrait of undergraduate Jewish students in five UK cities

This study, financed by the Union of Jewish Students (UJS) and supported by UJS and the United Jewish Israel Appeal (UJIA), is based on qualitative data gathered in focus groups held in early 2016 in several UK cities, and was designed to help UJS to refine its strategic priorities. It builds on the findings of the 2011 JPR study of Jewish students, the first in-depth look at Jewish student life in the UK.

The report highlights how key components of providing for Jewish students’ needs involve ensuring that the religiously observant are able to live full Jewish lives at university, and creating multiple frameworks for all Jewish students to explore what it means to be Jewish in an open, non-judgemental and thoughtful manner.

The report is published at a time of heightened concern about life on campus for Jewish students following violent protests at King’s College London and University College London in January and October respectively, and a reported increase in antisemitic incidents on campus in the first six months of this year.

The research finds that Jewish students rarely encounter traditional antisemitism at Britain’s universities, but notes that discourse about Israel and Zionism on campus can often be aggressive, intimidating and toxic, leaving some Jewish students frightened, angry and confused. It also includes some evidence of Jewish students being cautious about revealing their Jewish identity in public, and particularly any connections they may have with Israel. Nevertheless, it indicates that their general interactions with non-Jews on campus are typically positive, with open interest and even a desire to be included in Jewish events not uncommon.

The study highlights the importance of community in Jewish student life, and the role that Jewish Societies play in providing a home from home. It argues that JSocs should see themselves as surrogate Jewish communities, working year-on-year to create models of community that are warm, engaging and non-judgemental.

Link to article including link to pdf, Searching for community: A portrait of undergraduate Jewish students in five UK cities 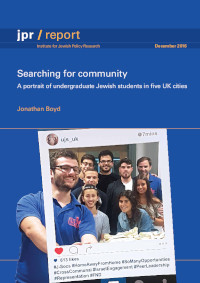