Jews in couples: Marriage, intermarriage, cohabitation and divorce in Britain

Much of the debate about intermarriage in the UK has been based on American Jewish statistics, and an assumption that the situation either mirrors reality in Britain, or foretells the probable and almost inevitable future of the UK Jewish community.

This 2016 report is the first dedicated study of the topic in Britain. It estimates that the intermarriage rate in Britain in 2016 stands at 26%, which is dramatically lower than the equivalent figure of 58% for the United States. Nevertheless, it finds that, whereas more or less all children of in-married Jewish couples are raised as Jews, this is the case for only a third of the children of intermarried couples. It also demonstrates that intermarried Jews exhibit far weaker levels of Jewish practice than in-married Jews on all measures investigated.

Download can be found on page, Jews in couples: Marriage, intermarriage, cohabitation and divorce in Britain 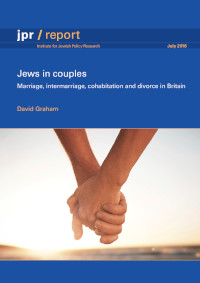