The project was undertaken by Binoh of Manchester amongst its client group, The Orthodox Jewish Community of North Manchester. This is mainly based in the Broughton Park area of Salford with an overspill community in the neighbouring Bury and Manchester metropolitan areas. The community is ethnically compact, little known outside its location and buffeted by racial and economic problems. Different norms exist for acceptable music, literature, images and discussion material and mainstream culture i.e. television, films, magazines and internet use etc. is prohibited. The community’s growth over the last few years has been huge. High birth rates make the community ‘bottom heavy’, and it is estimated that the ultra-orthodox community is increasing its share of the Anglo-Jewish community by approximately 1.5% per year. The research uncovered a wealth of information that is central to understanding the mental health needs and concerns of the Orthodox Jewish Community. The foremost findings that emerged during the research were:

A distrust of non-Jewish professionals e.g. doctors, psychiatrists and nurses who were seen to be unsympathetic or ignorant of the community’s cultural and religious needs. Comments such as “most Non-Jewish Practitioners have no understanding of our community and therefore can make serious errors of judgement” were commonly made.
Fear of stigma attached to mental health issues. Although this is prevalent in many close knit and ethnic minority communities this was particularly prevalent within the community as it was associated with not obtaining suitable marriage partners for themselves, siblings, children or other family members. One questionnaire respondent even said that “stigma within the community is a greater concern to people requesting and accepting help (than gaps in current service provision) 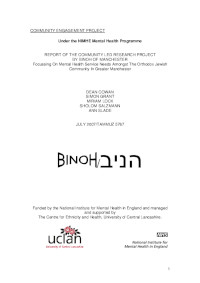