This report describes a study of the Jewish population of the London Borough of Hackney based on the 1971 Census. It was borne from the lack of an official religious or communal census, which has meant that until the present time, the Jewish demographic studies that have been undertaken in Britain were solely of a global nature. This produced results of vital statistics, as well as gross totals of Jews, but only from unofficial sources or by indirect methods. Most of these studies relied for their information on Jewish sources such as synagogue statistics, which were often inaccurate and out of date. The need for accurate statistics in order to plan amenities such as schools, youth clubs, old age homes, and other communal facilities is well known and appreciated, but no material has so far been produced that will shed any useful light on such problems. It was determined that at this stage it would be impossible to undertake our own survey of the Jewish population, either of the country or any large centre, so it was decided to concentrate our
efforts on a compact and accessible geographical area with a large number of Jews. Efforts were directed towards finding some way of using official statistics from the 1971 Census, in particular of the borough of Hackney.

The study has shown that the Jewish population of Hackney is a variegated and diverse group of people. However, most of them felt that they had some links or group identity in common, whether culturally or religiously-based, and they were certainly seen as a cohesive ethnic grouping by other Hackney residents. Many of the Adath-Orthodox are happy to remain distant from both the mainstream of Anglo-Jewish life and many facets of twentieth century urban civilization, but the poor and aged, like many other inner city dwellers, have a feeling that they are a forgotten people living in physical insecurity in a high crime area. It is hoped that this study will bring to the attention of the Jewish community and all our fellow British citizens, that there still exists, in the 1970s, a Jewish proletariat in the inner city whose needs must not be forgotten. With such knowledge we in Britain may learn from the mistakes of American society when dealing with the complex problems of poor multi-ethnic neighborhoods.

Grizzard, Nigel, Kosmin, Barry A. Jews in an Inner London Borough: A Study of the Jewish Population of the London Borough of Hackney based upon the 1971 Census. Board of Deputies of British Jews. 1975:  https://archive.jpr.org.uk/object-uk329
Result from 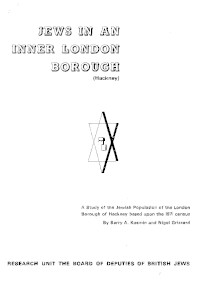