What’s changed about Being Jewish in Scotland? Project report to the Scottish Government

This short term study into people’s experiences of being Jewish in Scotland has been
carried out by the Scottish Council of Jewish Communities (SCoJeC) and funded by the
Community Safety Unit of the Scottish Government. The inquiry was a direct response to
the large increase in the number of antisemitic incidents in Scotland in the third quarter of
2014. This increase came as an unwelcome shock, not only to the Jewish Community, but
to civil society at large. The terrorist incidents in Paris and in Copenhagen that deliberately
targeted Jewish people occurred during the course of the inquiry, and these also affected
people’s feelings about being Jewish in Scotland.
This new study has enabled us to go back to many of the people who contributed to our
2012 Being Jewish in Scotland inquiry to ask whether, and if so, how and why, their
experiences and opinions have changed. It has also reached a significant number of
additional participants around Scotland.
We have gathered data through a combination of online and paper surveys, focus groups,
and informal discussions at events in locations throughout Scotland. We know from our
experience of running the initial inquiry, that when we hold events to discuss the
experience of being Jewish, especially outside the larger Jewish communities in the central
belt, these events and activities themselves serve to provide support and reassurance, and
build a sense of community and engagement.
We are currently preparing a detailed report of responses to the inquiry, and a special
edition of our quarterly newsletter Four Corners will be published around the end of April.
The present report outlines the methodology, summarises the main themes that are
emerging, and gives a flavour of the findings of the inquiry.

What’s changed about Being Jewish in Scotland? Project report to the Scottish Government
Project webpage 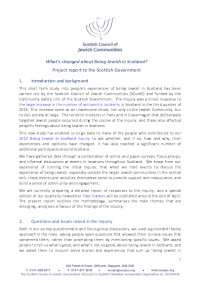