Birthright: A journey of Jewish identity

This is the first study to explore the ways in which Jewish identities and identifications with Israel are fostered
in and articulated by forty British Jews participating in Taglit-Birthright, which is a free ten day tour of Israel.
Birthright is an institutionalised programme for young Jews from fifty-two countries around the world, which
proclaims the primordial link of the Jewish people and the land of Israel through two means; education and
experience. Birthright sits at the forefront of the current debate concerning British Jewry, and what it means
to be Jewish in the twenty-first century, as the programme admits an array of participants who fall beyond the
traditional ‘boundaries’ of Judaism in order to discover and create their own Jewish identities. This paper
serves as an interesting comparison to the American accounts that currently dominate the anthropological
discourse of Birthright, by contextualising the aspects of the tour which affected British participants most. It
will illustrate that the documents proving Jewish heritage, requested by Birthright organisers in the United
Kingdom but not in America, is indicative of the key difference between the two cohorts which harnesses
British participants from feeling Jewish. The work then focuses on the tochnit (‘schedule’), which enabled
participants to negotiate their Jewish identities by picking and choosing aspects of Judaism and Israel that
they could personally identify with. It then argues that Jewish rather than Israeli identifications were more
widely expressed amongst participants. Overall results demonstrate that ethnic Jewish identities, which
gravitate less around religiosity, became increasingly favourable amongst this sample of British Jewry. This
infers that Jewishness should be measured across a spectrum that encompasses the multifaceted nature of
Judaism in the twenty-first century. 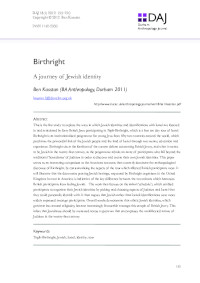