CST classifies as an antisemitic incident any malicious act aimed at Jewish
people, organisations or property, where there is evidence that the incident
has antisemitic motivation or content, or that the victim was targeted because
they are (or are believed to be) Jewish. Incidents can take several forms,
including physical attacks on people or property, verbal or written abuse,
threats against Jews or antisemitic leaflets and posters. CST does not include
the general activities of antisemitic organisations in its statistics; nor does it
include antisemitic material that is permanently hosted on internet websites 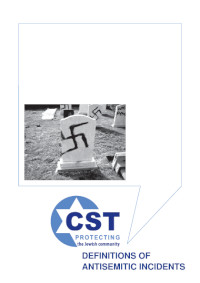