A study of the housing needs of the Jewish communities in Greater Manchester: Final report

There has been a Jewish community in Greater Manchester since the early 19th
Century. Greater numbers of people migrated to the area during and after the
Second World War when refugees and survivors of the Holocaust settled in a number
of the boroughs. Indeed, the largest Orthodox Jewish community outside London is
situated within the boundaries of Salford, Bury and Manchester. The overall aim of
this study was to provide an assessment of the housing needs of Jewish
communities in Greater Manchester.

In particular, the study aimed to do the following:
o Map population change, household sizes, ages and the location, size and
types of housing occupied by Jewish households;
o Examine whether there has been significant movement of the Jewish
community (domestically and internationally);
o Identify a range of demographic trends amongst the sample population,
including housing circumstances and characteristics; economic activity, age,
employment, education / study, membership of a synagogue and the particular
denomination;
o Identify any housing needs relating to health, disability, age of the individual,
condition of the property, security of tenure, appropriateness of location,
proximity of the property to a place of worship, community infrastructure and
retail provision;
o Explore economic circumstances and housing costs, particularly in relation to
the financial capacity of the household and whether housing costs are being
met, whether the household has any affordability issues relating to its housing
needs now and in the future, and what barriers exist to specific housing
products such as affordable housing;
o Identify housing expectations, looking specifically at the type, tenure, location
and size of housing the household might expect in the short term future at
intervals of 5 years and 10 years;
o Explore future aspirations, focusing on longer term needs and aspirations of
the household including need arising from childbirth, aging; needs related to
health, disability or other factors over the next 5 years and the next 10 years;
o Assess the extent to which lifestyle, level of practice of religion or other
reasons motivate or demotivate household movement;
o Assess whether the existing home meets the current needs including religious
and cultural needs; and
o Measure the level of community cohesion with the wider community in
Manchester and measure the extent of anti-social behaviour, harassment,
incidence and fear of crime.

The study was commissioned by Manchester Jewish Housing Association in
December 2010 and was conducted by a team of researchers from the Salford
Housing & Urban Studies Unit (SHUSU) at the University of Salford. The study was
greatly aided by research support from a number of community interviewers and was
managed by a steering group composed of representatives of Manchester Jewish
Housing Association, Bury Council, Manchester City Council and Salford City
Council.

Link to download in university repository, A study of the housing needs of the Jewish communities in Greater Manchester: Final report 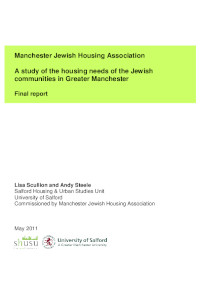