Elections were held in 181 local authorities
in England, Scotland and Wales on 3 May 2012, for
the London Assembly and for the mayoralties of
London, Liverpool and Salford. Ten other cities held
a referendum to decide whether to adopt the
system of an elected mayor, while one, Doncaster,
voted on whether to abolish theirs.
The British National Party (BNP) stood 137
candidates in the local elections, as well as standing
for the mayors of London, Salford and Liverpool,
and for the party list section of the London
Assembly. This compares poorly with the 323 BNP
candidates who stood in the local elections in 2011,
and with the 611 BNP candidates who stood the last
time these seats were up for election, in 2008. This
fall in candidate numbers continued the BNP’s
gradual decline in membership numbers, financial
resources and popular support over the past three
years.
Partly as a result of the BNP’s problems, this
election saw an increased presence from other
far right parties. The National Front (NF) stood
38 candidates, more than it has managed
to muster for several years, and stood for mayor
of Liverpool and the party list section of the London
Assembly. Other, tiny far right groups, such as the
British Freedom Party and the Democratic
Nationalists, stood candidates in single figures.
The English Democrats (ED), although not itself
a far right party, has absorbed large numbers
of former BNP members in recent years without
requiring any of them to publicly renounce their
views. In this election the ED stood 87 candidates
in the local elections, well over a third of whom
were former BNP activists, candidates or councillors.
It also stood for the mayor of Liverpool and for the
party list section of the London Assembly.
The elections took place against the backdrop
of recession and public service cuts, which might
be expected to benefit extremist parties. The
question of candidates’ attitudes to the Jewish
community became a significant theme in the
London mayoral election, particularly regarding
statements allegedly made by the Labour
candidate, Ken Livingstone 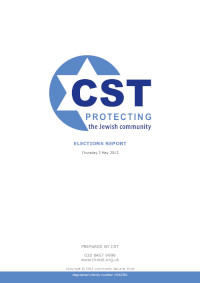