A guide to Jewish television: Prospects and possibilities

The JPR Working Party on Television was predicated on the belief that there is a case for seriously considering television as a catalyst for reinvigorating contemporary Jewish culture.

It was established to examine the possibilities for Jewish programming and content following two seminars (May 1997 and February 1998) and the publication by JPR of Roger Silverstone's policy paper Jewish television: prospects and possibilities (March 1998).

It met five times during 1998-9 to explore this new field. This paper which details the findings and conclusions of the Working Party, will hopefully act as a guide in this field and move forward the intellectual exercise involved in creating a Jewish presence on television. 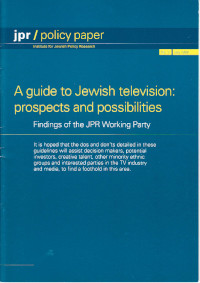