The social attitudes of unmarried young Jews in contemporary Britain

The period between the completion of education and the settling down into married life was regarded by earlier generations as the 'single years'.

Today most British Jews are privileged members of the middle classes and attend institutions of higher education until about the age of 22. They are less likely than earlier generations to marry, and if they do it is generally at a later age, often in their thirties. Alternative lifestyles, including cohabitation and same-sex relationships, are also much more common nowadays. For most contemporary British Jews the 'single years' are the late twenties or early thirties; by the age of 40 the majority are married. These new patterns require new responses. 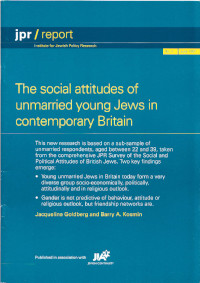