Jews in Russia: A Century of Demographic Dynamics

Numerical dynamics of the Jews in Russia as a whole and in its two capital cities, Moscow and St. Petersburg, during the 20th century have been examined in this paper. In an effort to understand the long-term population decline, the dynamics of Jewish marriage, fertility and mortality were analyzed in detail. The role of the negative balance of births and deaths was compared with the influence of emigration. Special attention was paid to the post-war period as a whole, and particularly the period following the start of the recent Jewish exodus from the former Soviet Union in 1989.

PDF (via academia.edu), Jews in Russia: A Century of Demographic Dynamics

Tolts, Mark Jews in Russia: A Century of Demographic Dynamics. Conference on Population of Russia in the 20th Century (Moscow, December 21–22, 1998). 1998:  https://archive.jpr.org.uk/object-rus63
Result from 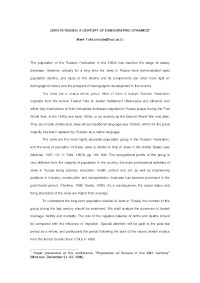