The Jews of Moscow in the 1990s: Is the Religious Renaissance Really Taking Place?

The report contains extensive data that characterize the religious situation among the Moscow Jews in the 1990s. It is based on personal observations of the author as well as on analysis of the Jewish newspapers and sociological surveys. The current situation is strikingly different from that existed in the Soviet times. The state and society demonstrate their respect to Judaism and its institutions (just like to others religious). A number of synagogues IS growing; religious educational institutions are functioning; various religious literature is published, thousands of people celebrate Jewish holidays (festivals).

However, only a small number of Jews can be characterized as observant in the Orthodox meaning of this word. It is true that their number has somewhat increased in Moscow, however only due sefardic Jews - recent migrants to the capital from the Northern Caucausus and some countries of the CIS.

This situation can be explained by some realities of the Russian life in the 1990s and by the peculiarities of the Jewish diaspora's life in the Soviet period. Thus, energetic efforts undertaken during the last ten years by the Jewish religious organizations and individual enthusiasts (both within the country and from abroad) resulted in a very low return. Under the situation, it is hardly possible to speak about the real religious revival among the Russian (Moscow) Jews.

Credit for Translation of Abstract and/or Title 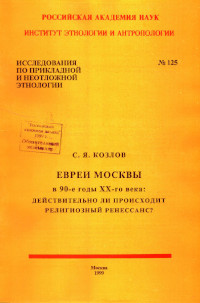