MCA Romania – The Center for Monitoring and Combating AntiSemitism
in Romania was established in 2002 as a non-governmental
and non-profit organization.
The 2003 MCA Romania Report is the second annual report
presenting the trends in anti-Semitism and Jewish-related issues in
Romania.
In 2003, anti-Semitism continued to be a problem in Romania. As in
past years, there was a general refusal to deal with the Holocaust in
Romania, as well as to seriously implement hate crimes bills. The
extremist Romania Mare Party remained in the news - but this time
with leader Vadim Tudor's attempts clean up his anti-Semitic and
extremist image.
One bright spot was the Wiesel Commission, initiated by President
Iliescu, which is documenting the final solution in Romania. It is
hoped that in the year ahead there will be more effort made to
combat anti-Semitism through Holocaust education, and effective
legislation. 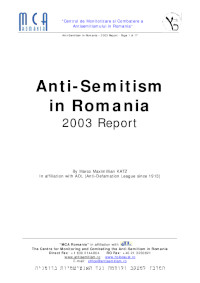