Christian-Jewish Relations in the Netherlands

The establishment of the state of Israel-and not the Jewish suffering during the Shoah-has catalyzed in the Netherlands a serious rethinking of the relationship of Christianity to Judaism. The theology that Christians had replaced Jews as the “new” Israel was belied by the reempowered Jewish polity in the Land.
Christian-Jewish relations have several components. One aspect is that a number of Christians study Judaism. A second is interfaith dialogue, and a third concerns Christian attitudes toward Israel. These are to some extent intertwined.
The current Israeli-Palestinian struggle provides a cover for rehabilitating ancient anti-Jewish feelings. The deeper, historically conditioned anti-Jewish tendencies are not easily disposed of. The culture of paranoiac anti-Judaism is still alive.

Christian-Jewish Relations in the Netherlands 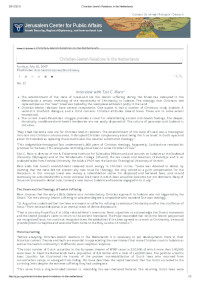