Very important centres of East European Jewish life used to be located
on the territory of modern Lithuania. Almost all of the Jews living there
were murdered by the Nazis and their Lithuanian accomplices. In the
Soviet Union, commemoration of the Jews and the preservation of their
heritage were taboo. This changed with Lithuanian independence. However,
the acceptance of co-responsibility in the murder of Lithuania’s
Jews has met with resistance within the political world. The refusal to
prosecute alleged perpetrators of the Holocaust is one vexing example.
However, the place of Lithuanian Jewish heritage is increasingly secure
in the view of history now found in society at large and among young
people in particular. 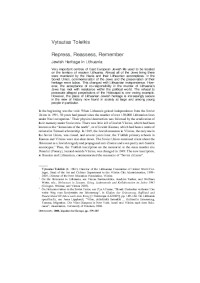