The Roles of the Jews in Italian Society

Most Italians think there are many times more Jews in Italy than the thirty-one thousand paying members of the Italian community. Native Italian Jews probably number no more than fifteen thousand. There are sizable communities of Libyan (mainly in Rome) and Lebanese and Iranian origin (mainly in Milan). The false perception of a large number of Jews in Italy results from the fact that several Jews have indeed played key roles in Italian society over the past century and a half.
Jews see themselves – and also are seen as such by many educated Italians – as one of the “tribes” of what can best be called “the Italian nation in the making.” The rise in recent decades of the Northern League shows once again that the idea of Italy as a single state is a contested one. In such a context there is suddenly a place again for the Jews as one of the distinct Italian groups, as was the case for many centuries before Italian unity.
Another development of the last decades has been the reinvention of the Italian Fascist Party. Most of its members joined in 1995 a new movement, Alleanza Nazionale. Its leader, Gianfranco Fini needed the Jews and Israel to give legitimization to his party as genuine democrats.
External developments have fostered a sudden reemergence of Italian Jewry. This has made Italian Jews again proud of their identity.

The Roles of the Jews in Italian Society

Segre, Dan V. The Roles of the Jews in Italian Society. Jerusalem Center for Public Affairs. January 17 2010:  https://archive.jpr.org.uk/object-iti7
Result from 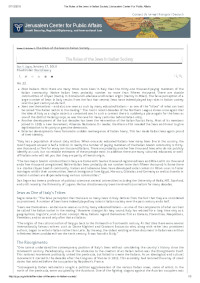