The Jewish community of Dublin has been in existence for 400 years. Nowadays, many Dublin Jews are descended from Lithuanians who settled in Dublin at the turn of the twentieth century. Most Dublin Jews are integrated into Dublin society, yet little is known of cultural practices specific to Dublin’s Jewish community. This dissertation focuses on the practice of liturgical music in Terenure synagogue, one of Dublin’s two remaining Orthodox synagogues. While music is an integral part of all synagogue services throughout the year, the musical repertoire of the Sabbath morning service has been selected as representing the music which is most commonly experienced by practicing Orthodox Jews in Dublin. Much of the music in Dublin’s Orthodox synagogue has been retained as part of a Lithuanian oral tradition. However, the Dublin Jewish community is currently undergoing a demographic shift, owing to the emigration of Dublin-born Jews coupled with migration into Dublin of Jews from a variety of social, cultural and national backgrounds. As the profile of the Jewish community changes, there is evidence of a gradual shift in the musical tradition of the synagogue. Here there is an attempt to preserve part of the Lithuanian musical tradition for the future.
Ethnographic fieldwork has been conducted among all sections of the Jewish community of Dublin in order to obtain information regarding the history, culture and identity of Dublin Jews. This has provided insight into the oral tradition which has retained the music of the Orthodox synagogue thus far. Other sources of information have included archives and further published/unpublished resources. The research has also involved recording, transcribing and analysing examples of liturgical Jewish music performed in Dublin. This has resulted in a comprehensive historical account of the Dublin Jewish community together with a discussion on Irish Jewish identity. Such material provides a background for the corpus of music which has been collected from various contributors. As well as recordings, this features six fully transcribed versions of the main sections from the Orthodox Sabbath service performed by five individuals, and a discussion on performance practice within the synagogue. It also includes examples of congregational singing which also forms a significant part of the service. Considerations are given to issues including emotion, identity, transmission, gender and the role of the congregation in the performance of music within the Orthodox synagogue of Dublin.
The findings reveal that musical performance in the synagogue assists in promoting a sense of community among those who participate. Orthodox Jewish liturgical music and the way it is disseminated whether in the synagogue or other setting also provides a link with the past, dialogue with the past being an integral part of broad Jewish culture. Prior to this, little has been documented regarding the music of the Orthodox Dublin synagogue; therefore this research provides a basis on which further study of the topic may be conducted.

Link to download in university repository, A musical exploration of the Sabbath morning service in Dublin's orthodox Jewish community 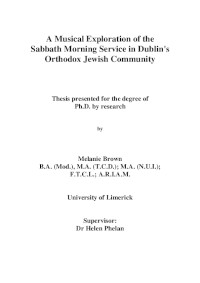