TEV Foundation and its associated research center, The Brussels Institute, are new additions in the struggle against anti-Semitism. Their activities include the scientific research and monitoring
of anti-Semitism and related prejudices—confronting and surmounting ignorance. Since 2013, the Institute has issued monthly and yearlyreports on anti-Semitism. The reports cover two types of actions: hate crimes and hate-motivated incidents, defined by OSCE as follows:

The extensive monitoring of anti-Semitic hate crimes requires the simultaneous use of several types of sources. The events must be recorded and categorized based on their characteristics.

The annual report summarizes the data from the monthly reports by types of incident and presents the legal cases. Based on standard international methodology, in our monthly and annual reports we categorize hate crimes as actions, events, atrocities or manifestations with proven antiSemitic intention or content that are directed towards Jewish people and their institutions or property. The seven form of hate crimes are: murder, serious physical offense, assault, vandalism, threat, hate speech and discrimination.
Of these, the amount of hate speech is clearly the highest since 2013; other recorded forms were vandalism, assault and threat. Other forms have not been reported.

Since 2013, TEV Foundation has provided an annual, comprehensive survey on Hungarian society’s attitudes towards Jews. The third questionnaire-based survey, conducted in
November 2015, shows that the proportion of anti-Semitism slightly increased last year. The summary of the results shows that one-third of the population harbors (to varying extents) the most
common and clichéd anti-Semitic stereotypes.

The survey examined the respondent’s opinions and attitudes towards Jews, the frequency and strength of anti-Semitic prejudices, perceptions, and associations of anti-Semitism. The sample size was 1200 respondents, aged 18 and older. The respondents were questioned in person. We based our survey methods on the ideas and questionnaires developed by the sociologist András Kovács. We used updated, extended versions of
questionnaires that have been used repeatedly since 1995, allowing us to juxtapose data from different years.

We also discuss an encouraging legal action: punishment for denial of the Holocaust by a Mrs. Z. V., the result of action taken by the TEV Foundation.

Includes Hebrew abstract at the end of the report 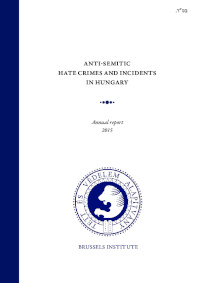