Jewish Studies in Germany reflects the tremendous demographic transformations of
the Jewish community since 1990. Yet, this article also posits that non-Jewish Germans too have
changed substantially due to immigration and new generational views on the legacy of the Holocaust.
As such, Jewish Studies has to communicate the history of the German Jewry to Jews and
Gentiles mostly unfamiliar with its rich legacy. It needs to comment on Holocaust memorialization
to educate new generations of Gentiles as well as Jewish immigrants, for whom the end of
the Cold War bears more significance than the Holocaust. Finally, it needs to be part of new conversations
between Christians and Jews that also includes the large Muslim minority in Germany.
While the changing audiences in Germany dictate a focus on Jews in Germany, Jewish Studies
also needs to embrace a more European perspective reflective of the more comparative and transdisciplinary
scholarship abroad. Despite the significant growth of Jewish Studies in Germany over
the last two decades, these challenges call for even greater efforts. 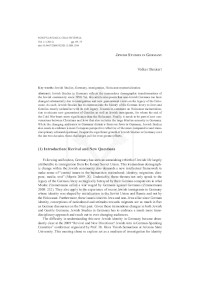