2015 Report on Antisemitism in France

SPCJ publishes statistics and analyses on Antisemitism in France in 2015
Antisemitic acts perpetrated on French soil are recorded by SPCJ
in close cooperation with the Interior Ministry.
Antisemitism in France in 2015: incredibly high, extremely violent and home-grown:
‣ 808 Antisemitic acts committed in France in 2015 led to filing a complaint.
This number is extremely high.
‣ In 2015, 29 people (men, women, children, babies) were taken hostage in a kosher
supermarket on 9 January 2015. 4 people were executed.
‣ For the first time, Antisemitism in France reached a very high level regardless of the armed
conflict in the Middle East.
‣ Once again in 2015, Jews, who represent less than one percent of the total population, are
the target of 40 percent of all racist crimes committed in France, and 49 percent of racist
violent acts committed against people.
‣ In France, there were on average two Antisemitic acts perpetrated every day in 2015.
‣ In 2015, many victims of Antisemitic acts said that they preferred not to file a complaint for
Antisemitic insults, threats or light violence, while others were executed a few months earlier
because they were Jews.
‣ The number of Jews that leave the country or think about leaving France for another country
keeps on increasing. A large proportion of French Jews do not feel at ease within society and
feels misunderstood even besides security issues. 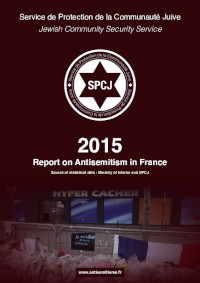