The good air transport links with most major European cities and Malta, has led to an increase in tourists from all over the world. This has also led to an increase in tourists of the Jewish faith. These tend to be mainly coming from North America, and the cultural tours that are planned for them, always provide a number of visits to Jewish related historical and cultural locations. The itineraries that are planned make sure that the Jewish heritage on the islands is visited. What are these locations that attract the attention of Jewish visitors to Malta?

The earliest mention of a Jewish community in Malta is securely dated to the first centuries of the Common Era. In various underground burial places, around the old capital city of Malta, there are catacombs with Jewish symbols carved on the walls of burial places. These tend to confirm the presence of a substantial Jewish community in Malta. The fate of this community is not known. The 13th century sees Abraham Abulafia, considered as a prophet, living in Malta and presumably dying here. Documentary evidence from the 13th century, point to a small Jewish community living here. By the 15th century it is clearly evident that there was a Jewish community, forming part, and taking part within the everyday life of Medieval Malta. Jews were to be recorded in Malta throughout the following centuries.

There are cemeteries dating from the 4th and 6th centuries, and others from the 19th century onwards. There is an indication of where the Jewish Silk Market was located during the Medieval times. Nowadays, pilgrimages are taking on a different aspect. The religious aspect of such a visit is not of great importance, while visiting places associated with the Jewish communities in Malta throughout the centuries, is of great significance. This can be referred to as nostalgic pilgrimage, and not necessarily a religious and spiritual pilgrimage. This is part of a cultural type of pilgrimage, identifying with previous communities of the same religious views.

This work is licensed under a Creative Commons Attribution-Noncommercial-Share Alike 4.0 License.

Link to article including link to pdf, Jewish Tourism to Malta: A Nostalgic Pilgrimage? 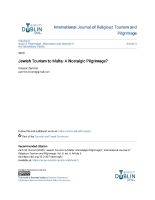