Academia.edu profile : https://independent.academia.edu/OlafGl%C3%B6ckner
Homepage : http://www.mmz-potsdam.de/dr-olaf-gloeckner.html
Olaf Glöckner is a researcher at the Moses Mendelssohn Centre for European-Jewish Studies in Potsdam (MMZ). He is also Lecturer at the Historical Institute and at the Department of Jewish Studies at Potsdam University. At the MMZ, he works as the Head of the Department “Sociology of Judaism”.

Olaf Glöckner did his PhD thesis on “Immigrated Russian Jewish Elites in Israel and Germany. Their Integration, Self-Image and Role in Community Building” (1990-2010). Currently, his research focuses mainly on transnational Jewish migration, German-Israeli relations, modern antisemitism and strategies of prevention, genocide studies and European-Jewish developments after 1989/90.

Olaf Glöckner has worked as one of the principal investigators within the research project “Jews and Jewish Education in Germany Today” (2008-2011), funded by the L.A. Pincus Fund. He also participated in research projects on “Discrimination and Hate Crime against Jews in selected EU member States” (2012/2013 and 2017/18), promoted by the Fundamental Rights Agency (EU). 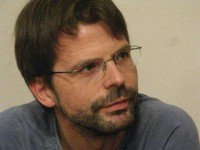 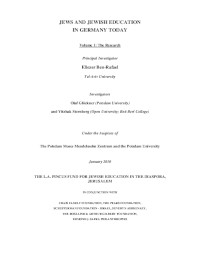 Jews and Jewish Education in Germany Today: Volume 1
This landmark research report describes a large-scale investigation of the Jewish population of Germany, the major current challenges facing it, and its educational institutions. The English version of the report apears in 3 volumes. Volume 1 presents the survey that was undertaken among close to 1,200 respondents throughout Germany.

The report also investigated and analysed the general landscape of Germany’s Jewish educational institutions, before conducting a content analysis of individual interviews of leading figures of Germany’s Jewish population that focused on how they perceive the present-day challenges of this community. 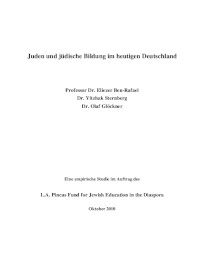 The German edition of this report appears in a single volume. The researchers interviewed more than 1,000 women and men inside and outside the Jewish communities, interviewed 25 leading representatives.

Surveys and interviews provided suggestions on how education and community work can be optimally shaped in the future. The study is supplemented with documentation on 91 Jewish educational institutions in the Federal Republic. 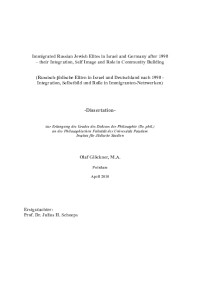 Immigrated Russian Jewish Elites in Israel and Germany after 1990 – their Integration, Self Image and Role in Community Building
Russian Jews who left the Former Soviet Union (FSU) and its Successor States after 1989 are considered as one of the best qualified migrants group worldwide, are well-known for cultural self-assertion, upward mobility and self-organisation.

This study uses Suzanne Keller's concept of “Strategic Elites” to describe Russian-Jewish Immigrants in Germany and Israel and reports on 35 interviews with Russian Jews in both countries. 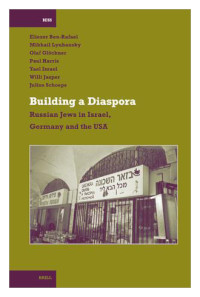 Building a Diaspora: Russian Jews in Israel, Germany and the USA
The crumbling of the USSR has set Russian-speaking Jews free to emigrate. From the threat of antisemitism to economic disaster, their “good reasons” to do so were numerous and within one and a half decade most of them moved out and scattered throughout the world. This book is about the million that settled in Israel, the half million now in the US and the 200.000 who settled in Germany. 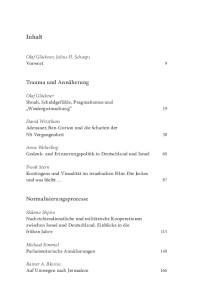 Since the establishing of diplomatic relations between the young Jewish State and Germany in 1965, the issue of German-Israeli relations is discussed again and again.

In this volume, sixteen German and Israeli authors describe trends of convergence, courageous projects of reconciliation, pragmatic cooperation in economy and intelligence collaboration. Today, Israel and Germany are important partners, in almost all areas of society, even while antisemitism in Germany and the Israeli-Palestinian conflict sometimes unsettles the relationship. 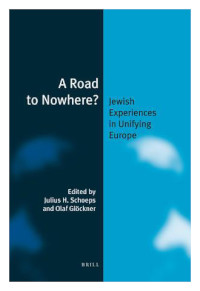 A Road to Nowhere? Jewish Experiences in Unifying Europe
Europe is in the midst of a rapid political and economic unification. What does this mean for the Jewish minority – numbering less than 2 million people and still suffering from the aftermath of the Shoah? Will the Jewish communities participate in Europe’s bold venture without risking total assimilation? Are they vibrant enough to form a new Jewish center alongside Israel and the American Jewish community, or are they hopelessly divided and on a “Road to Nowhere”?

This collection offers answers to these questions by renowned scholars from Europe, Israel, North- and Latin America – many of them also committed to local Jewish community building.

Being Jewish in 21st-Century Germany
An unexpected immigration wave of Jews from the former Soviet Union mostly in the 1990s has stabilized and enlarged Jewish life in Germany. Jewish kindergartens and schools were opened, and Jewish museums, theaters, and festivals are attracting a wide audience. While the ‘new Jews of Germany,’ 90 percent of them of Eastern European background, are already considered an important factor of the contemporary Jewish diaspora, they still grapple with the shadow of the Holocaust, with internal cultural clashes and with difficulties in shaping a new collective identity.

What does it mean to live a Jewish life in present-day Germany? How are Jewish thoughts, feelings, and practices reflected in contemporary arts, literature, and movies? What will remain of the former German Jewish cultural heritage? Who are the new Jewish elites, and how successful is the fight against anti-Semitism? This edited volume offers some answers.