A ground-breaking survey commissioned by NHS Salford Clinical Commissioning (CCG) has revealed concerns about immunisation take-up, healthy eating, amounts of exercise and attitudes to mental health within the predominately orthodox Jewish communities in the city.
507 people took part in the year-long research project that included peer-led focus groups as well as questionnaires. Key findings reveal that less than half of the participants take more than one hour of exercise per week, with around a quarter taking less than 30 minutes. Only half meet recommended levels of physical activity, which is significantly below the England average of 61%. Fewer than half of respondents believe exercise is very important, with far fewer men than women valuing exercise.
There is particular concern related to men’s lack of exercise, with just over a third meeting the recommended levels of physical activity compared to 67% nationally. The percentage of women meeting recommending levels at 56% is comparable to the 55% of women nationally.
With regards to children’s exercise, only 40% think it is very important that their child exercises. Less than half the children do more than an hour’s exercise per week, with a third doing less than 30 mins per week. Boys tend to do slightly more exercise than girls (possibly because they play football or ride bikes), contra to what was reported as being undertaken by the adults themselves; the trend seems to be that boys are more active than girls but this switches as they become adults.
The research also suggests that the healthy eating message is not always getting through to this community; only 10% of children are getting their ‘5 a day’ with 40% getting less than 3 fruit or veg a day. Over half the children in this community seem eat cake at least once a day, though crisps and other unhealthy snacks seem far less frequent. Alcohol consumption for adults is, however, very low compared to the rest of the population, although 12% of respondents might be classed as ‘binge-drinkers’ on the Sabbath.
Attitudes to immunisation in the orthodox Jewish community remain a concern. 13% said they would be unlikely to immunise their child in the future whilst 20% felt they were not given enough information about immunisation. For Salford as a whole, MMR immunisation take-up by 5 years olds averages over 97% which is far higher than appears in the Jewish communities.
Take up of cervical smears is also lower than the rest of the population with 67% claiming they would be likely to have a smear compared to the 80% target in Salford. It is thought that some of the lower uptake of cervical screening may be due to the low perceived risk of HPV infection and cervical cancer, the higher number of pregnancies and religious norms relating to menstruation.
Other findings of interest include the fact that almost a half of participants believe that mental health is a big stigma within the Jewish community which may prevent many people seeking the help they need. 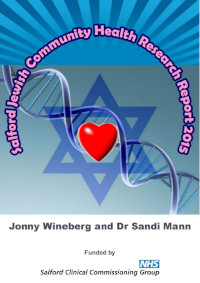